/ˌdʌɪəɡˈnəʊsɪs/ 1. the identification of the nature of an illness or other problem by examination of the symptoms.

So you left me standing in a hospital corridor, half dressed and scared, clutching a leaflet about a new breast biopsy and the remnants of my rapidly departing dignity.

But in truth, even then I went home assuming that all the mammograms, ultrasounds and biopsies were pretty standard and that this was all necessary just to rule out the remote possibility of cancer.  I was still clinging to the idea that this was ‘nothing to worry about’. I still can’t decide whether this was active self-delusion, real hope or just naivety.

The leaflet that had been shoved into my hand so unceremoniously described the biopsy that I would be facing in a week’s time.  My previous core biopsy had been a simple affair – quick jab of local anaesthetic (“sharp scratch coming up” – are all doctors/nurses taught this phrase at medical school?), some pressure and that sound of the staple gun, then a plaster and off I went.  The worst of it all had been the instructions not to shower for three days.

This new biopsy was going to be a bit more complex and long-winded but reading the leaflet it also seemed bizarre and, quite frankly, ridiculous.  This biopsy is called a ‘mammotome’ or an ‘x-ray guided breast biopsy’ and it basically consists of the patient stripping off (top only, thank god) and lying face down on a table with the offending boob popping through a hole specially cut in the bed.  Said boob is then squashed between mammogram plates so the radiologist can find the right spot, then that radiologist disappears under the table, cuts a small hole in the breast and uses a vacuum to suck out a tissue sample. Like I said, ridiculous right? Boob shaped holes in tables? Radiologists scrabbling around on the floor?  Vacuums sucking out boob flesh? I spent the week before the test telling friends about it and laughing about how stupid it all sounded. 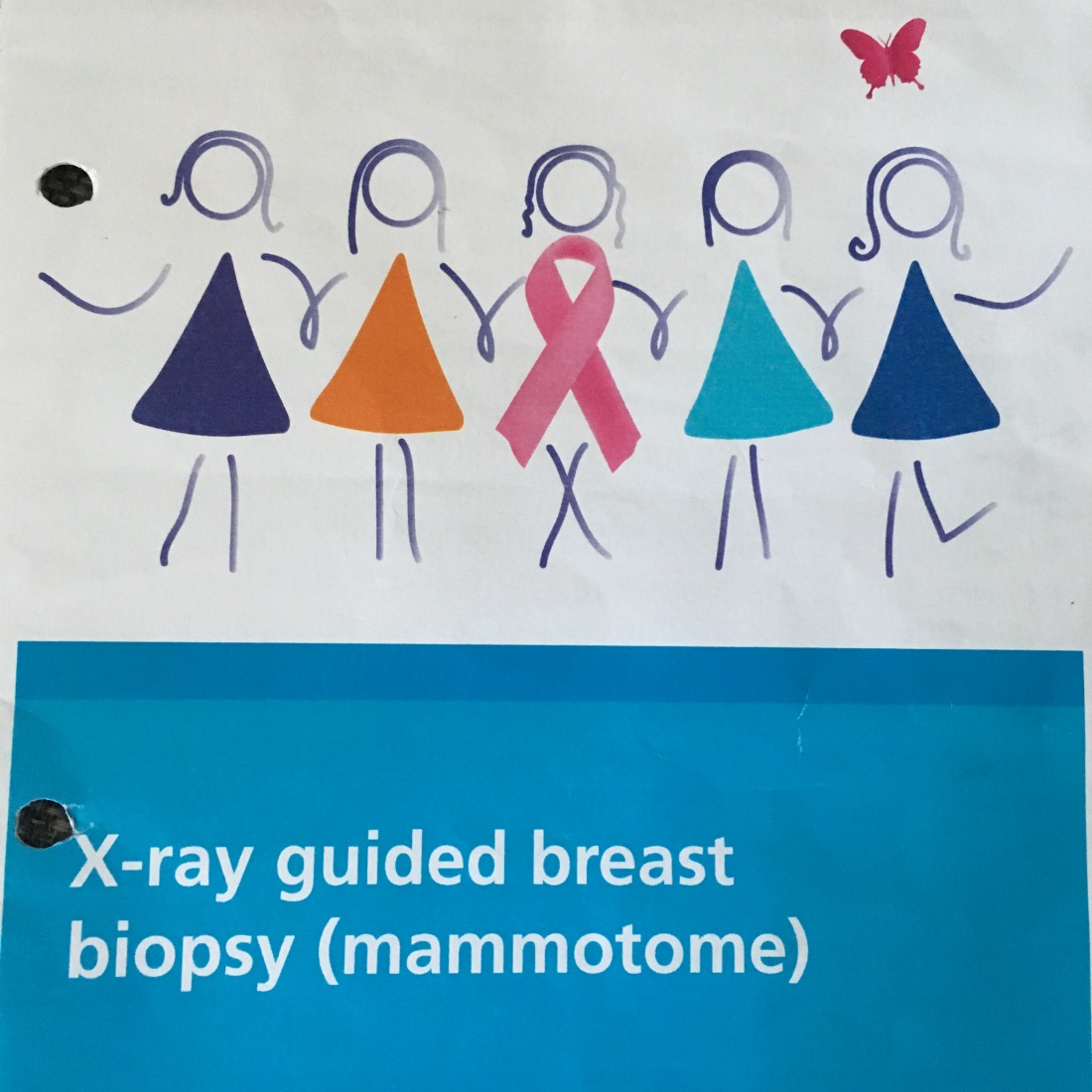 In truth, it really wasn’t something to laugh about.  The first thing is to say that mammograms hurt.  As women we are frequently told that they don’t hurt, that they’re just ‘uncomfortable’.  Well I’m sorry but any process that involves squashing one of your most sensitive fleshy bits very tightly between two metal plates hurts.  Ok, not burning-in-the-fiery-pits-of-hell hurt.  Not kidney stone hurt (believe me those f**kers kill ya).  But probably on that brilliant painting scale of pain, at least a Van Gogh (see below).  Believe me if men had to regularly have their testicles squeezed between plates, there’d be no ‘it’s just uncomfortable’, it’d be pain pills and dark rooms to lie down in afterwards all the way.

The blessing is that mammograms usually only take a few seconds.  Squish, squash, you’re done.  But with a mammotome, you’re on that table, face down, boob through a hole and splatted between glass like a fly on a windscreen for at least 30 mins.  They do give you a local anaesthetic (“sharp scratch”) so they can cut into you and hoover up that tissue but for me it wasn’t quite enough and the nurse’s attempt to converse about the weather and my job didn’t distract from 30 mins of Van Gogh pain and sheer grinding fear.  Then once the radiologist has sucked up all the biopsy material she needs, popped in a piece of titanium (yep, they whack a bit of titanium in your breast just so they ‘can find the spot again if we need to’) and crawled out from under the table, you’re left there still squashed between glass for another 10 minutes to stop the bleeding.  Thank god, your boob is still under the table as the bleeding I did not need to see.

Finally, you’re allowed to turn over, then the nurse says she just has to push on your sore breast for another 10 minutes to prevent bruising.  So now you’re face up, half naked and making awkward small talk with someone trying to push your boob inside your chest cavity.  Then it’s over.  Except it’s not.  Because despite all of the above you still have to have another mammogram to make sure the marker is in place.  Insult. Injury.  I practically had to roll my poor flattened breast up like a rug to get it back into my bra.

And then what? A week of waiting, wondering, worrying (there will be a “’W’ for …” blog post, believe me) before returning to the consultant for the final test results.  From somewhere I’d got the vague idea that if they were going to deliver bad news then I’d be asked to bring someone with me so I had a friend on stand by, but when that call didn’t come I blithely went to the appointment on my own, still in the land of ‘nothing to worry about’.

How wrong was I? The consultant who so confidently had told me two weeks ago that the ‘one thing we know is that you don’t have cancer’ was suddenly saying ‘unfortunately you do have cancer’.  Just in the right breast, not the left breast.  (That lump in the left breast? A benign fibroadenoma apparently.  Nothing to worry about).

And now he’s scribbling a drawing of how he’s going to cut a hole in my breast (he’s going to cut a f**king hole in my breast!), telling me I’ll need radiotherapy and packing me off to the ‘special room’ to sit with the breast care nurse who does her best to make a bit more sense of my situation.  But I’m listening to her through a haze, with only words like ‘invasive’ and ‘chemotherapy’ really piercing the weird fug I’m enveloped in. Then I’m crying, given a tissue and a ‘Breast Cancer Resource Pack’ and suddenly I’m outside.  I’m in the car park, phoning my brother (aware I’m about to put a small crimp in his Spanish summer holiday) and as soon as he says ‘hello’, the floodgates open and I’m standing in a hospital car park sobbing with sheer terror.

And that’s how I got my diagnosis.   That MRI I had for stomach pains led to the entirely accidental discovery of breast cancer. I had no lumps that could be felt, no physical symptoms.  If I hadn’t have left my job after 13 years, if I hadn’t joined Channel 4, if I hadn’t decided to make use of the private health care they offered, if I hadn’t pestered my gastro consultant into booking an MRI then the chances are the cancer would not have been found for years to come.  By which time my diagnosis, my treatment, my prognosis could have been very different.

My future has changed but there’s a good chance that Channel 4 really did save my life.

Redhead. Travel fan. Theatre addict. Escape room junkie. Baker. Knitter. Just happen to have had a malignant lump in my breast. View all posts by atozeeofbc